This article originally appeared on June 28, 2013 on WSJ’s MoneyBeat.  To view the original, click here.

By Dan Strumpf and Jerry A. DiColo 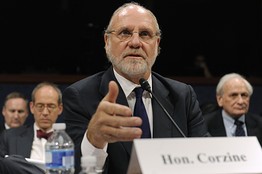 The civil charges levied Thursday againstJon Corzine for his alleged role in the collapse MF Global Holdings Inc. were a welcome development for many former customers of the firm.

But Lonnie Becker, a farmer who held an MF Global account, is just glad he’s getting his money back.

Like many farmers, Mr. Becker relied on MF Global to hedge the price of his crops and livestock. His farm in Fairmont, Minn., grows corn and soybeans on 1,800 acres and also raises hogs. When MF Global collapsed in October 2011, the money in his account — he declined to say how much — froze up for a week. He has gotten most of his money back, but in the meantime, he has had to take out loans from his bank to cover his farm’s costs.

“It’s been a long couple of years, but it sounds like we’re gonna get paid up,” he said.

Today, all of MF Global’s U.S. customers have received 89% of their lost funds. And on Thursday the Commodity Futures Trading Commission said customers will receive 100% of their money in a deal involving a settlement of charges with MF Global.

The news of the government’s lawsuit against Mr. Corzine hadn’t yet reached Mr. Becker on Friday — he was on his way to Chicago for his son’s AAU baseball game — but it’s of secondary importance to him anyway. The fate of his farm is more important, and he’s been encouraged by the slow-but-steady return of the money he needs to support it.

“There’s nothing but good news here lately,” he said.

John Roe, co-founder of the Commodity Customer Coalition, which has advocated for MF Global customers since the firm collapsed, said this week has marked a turning point in the group’s efforts.

“The landscape has really changed since yesterday,” said Mr. Roe, who is also a partner at Chicago-based BTR Trading. “”If everything goes according to plan, customers should be receiving 100% of both their foreign and U.S. accounts by the end of September.”

Nearly $1 billion in customer money went missing after MF Global collapsed under the weight of big leveraged bets on European debt. Regulators allege that the firm dipped into customer money to fund its final days before its collapse. Some customers say civil charges against the firm’s leaders don’t go far enough.

Scott Gettleman, an independent trader on the Nymex, lost $102,000 when MF Global imploded. He’s received 89% of his funds and was glad to hear the full amount would likely be coming soon—but he’s still hoping Mr. Corzine is brought up on criminal charges, or forced to compensate customers through a class-action lawsuit.

“Everybody is ecstatic to get their money back. It’s been a long haul. But you also want to see someone punished for this type of behavior,” he said. “If a normal person ran around and did this stuff, they’d be in jail.”