This article originally appeared in the February 20, 2013 edition of the Wall Street Journal.  To view the original, click here.

By Jacob Bunge and Aaron Lucchetti

A financial-industry regulator Thursday is expected to discuss the possibility of banning Jon S. Corzine for life from the futures industry, according to people involved in the process.

Two newly elected directors of the National Futures Association plan to push the agency to hold a hearing on the matter, having criticized the response of federal regulators some 16 months after the industry was shaken by the collapse of brokerage MF Global HoldingsLtd. , where the former New Jersey governor was chief executive.

The industry-funded association oversees brokers and asset managers, and a ban could curb Mr. Corzine’s ownership of futures-trading firms and make it more onerous for him to trade futures through a brokerage account, according to the directors leading the push. 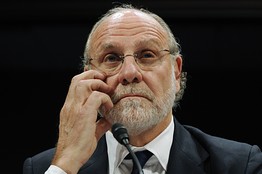 Mr. Corzine still is interested in trading and investing, according to people familiar with his plans, though it is unclear if he would ever want to open up a fund to outside investors.

Mr. Corzine, through a spokesman, declined to comment. He hasn’t been accused of any wrongdoing related to MF Global’s collapse and has said he wasn’t aware of a shortfall in customer money at the firm until the problem was discovered during merger negotiations days later.

In congressional testimony, he has expressed regret to customers about how their dealings with the firm concluded.

The push for sanctions against Mr. Corzine is being led by John Roe and James Koutoulas, two Chicago-based futures executives whose clients did business with MF Global, some of whom have yet to recoup all of their funds from the collapsed firm. They won election to the NFA board last month on a platform pushing overhaul of a sector battered by the demise of MF Global and the accounting scandal that emerged last year at Peregrine Financial Group Inc., another futures brokerage.

MF Global sought bankruptcy protection after the firm piled up risky bets on European sovereign debt, part of Mr. Corzine’s strategy for the firm to take larger risks with its own capital in a bid to rebuild the futures brokerage as an investment bank. The collapse revealed a shortfall in customer funds estimated at $1.6 billion and cast scrutiny on the futures industry’s reliance on self-regulation.

Mr. Roe and Mr. Koutoulas said they plan to formally present their proposed ban on Mr. Corzine’s future involvement in the industry to the NFA board on Thursday. It isn’t clear whether the NFA will make any decision on the matter at the meeting, people close to the board said.

Several people close to the NFA board expressed doubt that a hearing would happen because the federal Commodity Futures Trading Commission is still working on its own investigation and likely won’t want hearings about an industry ban before its case is completed. There are also questions about the NFA’s jurisdiction over Mr. Corzine, as MF Global was directly regulated by futures exchange operator CME Group Inc. CME +1.08%

To secure a hearing, a majority of the 28-member NFA board would need to vote in favor of requesting the agency’s business-conduct committee consider opening an investigation into Mr. Corzine, Mr. Roe said. If that committee decides to bring a complaint against Mr. Corzine, he could then contest the issue, Mr. Roe said.